Second Life gets its first tabloid

A â€˜postcardâ€™ from the Second Life cyber-community. 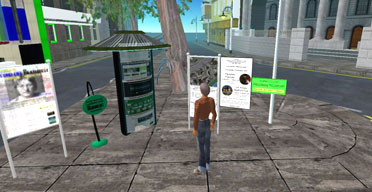 The weird and wonderful parallel cyber-community that is Second Life is to get its first tabloid. Axel Springer, the publisher of Germany’s top-selling Bild newspaper, is poised to launch a weekly paper designed to sate the virtual population’s appetite for news and gossip.
SL News will be written in English and packed with the latest from the simulation game – a rapidly expanding site where users create characters, called avatars, and go about the everyday business of chatting with fellow residents. Avatars can also use with Linden dollars, a virtual currency which can be exchanged into real money, to buy new clothes and even property.

Mr Springer plans to construct an online editorial office for SL News. A real editor-in-chief will then recruit a team of roving reporters from among the avatar community, which currently numbers more than a million “residents”.

“It will be a colourful tabloid, with snippets about showbusiness and human interest tales from the avatar world,” explained Dirk Meyer-Bosse, a spokesman for the German publishing giant.

Due to be launched in December, the paper will cost between 10 and 15 Linden dollars. It will likely be sold by subscription – posted into mailboxes across the virtual parallel universe. Avatars already get news from Reuters’ online news agency, which opened up for business in October, run by its virtual bureau chief, “Adam Reuters”.

The new venture makes Mr Springer one of a plethora of real businessmen who are using the booming site to do business and raise their public profile. Some $500,000 (Â£260,000) is spent on the site daily by residents, on various cultural pursuits such as attending university lectures or concerts by real musicians.

Mr Springer says the newspaper will tailor its unprecedented venture according to feedback from avatars, but one thing is clear: It will not feature news stories from the real world.