The End of Publishing…

Amazon introduced a new hardward to read eBooks on the go: Kindle. 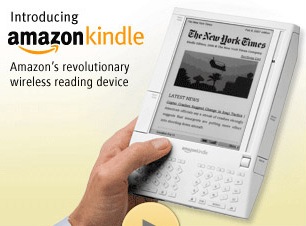 Guy Kawasaki was writting about the device today:
“Today Amazon announced its foray into selling hardware with a data service. The device is called “Kindle,” and it represents a daring move for an “online bookstore.” You’re going to see two kinds of reviews: bad ones from people who haven’t used it and good ones from people who have. It’s that kind of product—plus Jeff Bezos’s reality-distortion field isn’t as large as Steve Jobs’s. I have used it and if someone gave me a choice of receiving an iPhone or a Kindle, I’d pick the Kindle.”

Product Description on Amazon:
Revolutionary electronic-paper display provides a sharp, high-resolution screen that looks and reads like real paper.
Simple to use: no computer, no cables, no syncing.
Wireless connectivity enables you to shop the Kindle Store directly from your Kindle—whether you’re in the back of a taxi, at the airport, or in bed.
Buy a book and it is auto-delivered wirelessly in less than one minute.
More than 88,000 books available, including 100 of 112 current New York Times® Best Sellers.
New York Times® Best Sellers and all New Releases $9.99, unless marked otherwise.
Free book samples. Download and read first chapters for free before you decide to buy.
Top U.S. newspapers including The New York Times, Wall Street Journal, and Washington Post; top magazines including TIME, Atlantic Monthly, and Forbes—all auto-delivered wirelessly.
Top international newspapers from France, Germany, and Ireland; Le Monde, Frankfurter Allgemeine, and The Irish Times.
More than 250 top blogs from the worlds of business, technology, sports, entertainment, and politics, including BoingBoing, Slashdot, TechCrunch, ESPN’s Bill Simmons, The Onion, Michelle Malkin, and The Huffington Post.
Lighter and thinner than a typical paperback; weighs only 10.3 ounces.
Holds over 200 titles.
Long battery life. Leave wireless on and recharge approximately every other day. Turn wireless off and read for a week or more before recharging. Fully recharges in 2 hours.
Unlike WiFi, Kindle utilizes the same high-speed data network (EVDO) as advanced cell phones—so you never have to locate a hotspot.
No monthly wireless bills, service plans, or commitments—we take care of the wireless delivery so you can simply click, buy, and read.
Includes free wireless access to the planet’s most exhaustive and up-to-date encyclopedia—Wikipedia.org.
Email your Word documents and pictures (.JPG, .GIF, .BMP, .PNG) to Kindle for easy on-the-go viewing.