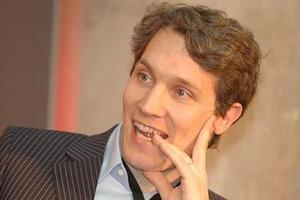 The german samwer brothers (Picture right: Oliiver Samwer) invested in Facebook.
Rumors say that they bought 0,3% of the company for 60 Mio USD. Due to the big currency gab between Euro and Dollar they “just” invested 40 Mio Euros.
The Samwer brothers will also be strategic partners to build up facebook in europe and especially in Germany.

Reuters says: “German Internet entrepeneurs, the Samwer Brothers, have become the latest new shareholders in social networking site Facebook, Alexander Samwer told Reuters on Tuesday. Samwer said the brothers had taken an undisclosed stake in the company and would now become their strategic partners in Europe.”

Read more on Reuters or Techcrunch.