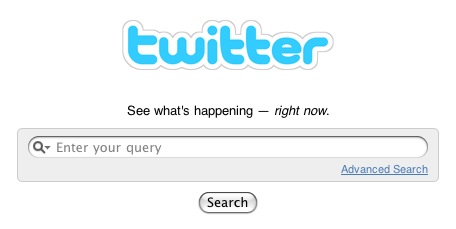 Big changes are in the works for Twitter and their realtime search features, says new Twitter VP of Operations Santosh Jayaram, changes that may spell the end of the status quo both for the microblogging platform in particular and the entire concept of organic searching in general.

Jayaram, who previously worked on Google’s search quality team, spoke two weeks ago at a TIEcon 2009 preview conference about the changes Twitter is planning to implement to their search features, providing attendees with a compelling look at how the microblogging platform may rise up to challenge even Google in terms of indexing Web 2.0 content.

The most major change Jayaram spoke about concerns how Twitter indexes content. Until now, Twitter’s realtime search feature has been limited to Tweets themselves; the content of each Tweet is indexed and searchable through Twitter’s search engine. That, Jayaram says, is going to change – at an unspecified point in the near future, Twitter will begin crawling and indexing content linked from Tweets, not just the tweets themselves anymore.

Look out, Google – Twitter’s got your number. The change to Twitter’s search feature is huge, and it all boils down to analytical data, and the immense value that such information carries with it. Twitter’s ability to track realtime trends already puts Google’s to shame – and taking that ability off the twitter.com domain means that the microblogging platform is poised to become the internet’s premiere Web 2.0 content index. Even the brief delay of a few hours in Google’s search engine results represents eons in the hyperspeed context of the modern internet. Twitter can fill in that gap, and Jayaram provided us with some juicy details about how they’re going to be doing that.

One of the ways that Twitter is going to increase the relevancy of its search engine is by introducing a Twitter “reputation” ranking system, says Jayaram. Currently, when searching a popular trending topic, or clicking its link on the Twitter sidebar, users are usually overwhelmed with a wealth of “hollow content” like retweets, comments, and so on. Twitter’s reputation ranking system will change that by providing users with an authoritative view of trending topics and keywords on Twitter, instead of just flinging users into a chronological timeline.

That change alone will improve Twitter’s search by leaps and bounds. I can’t wait to find out more about when we can expect to see these changes implemented, and how Twitter plans to show users the data that it collects about off-site content.