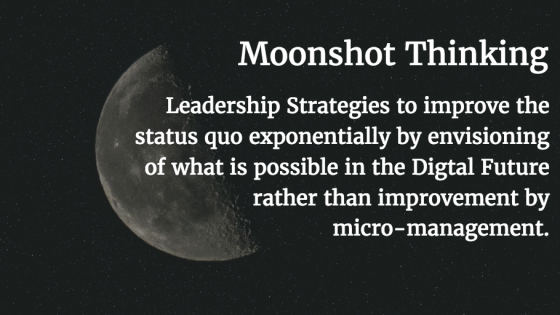 Leadership Keynote Speaker, Monty Metzger, defines game-changing management strategies and leadership styles to help outperform your competition and preparing your corporation for the fourth industrial revolution – our digital technology future. The most influential leaders in tech have embraced moonshot thinking for their leadership strategy.

Wired Journalist Sonal Chokshi points out: “It’s often easier to make something 10 times better than it is to make it 10 percent better.” That’s the core of the idea of moonshots. The first step is to identify a huge opportunity which you are able to solve and create substantial value on the way. Seeing the big picture will help you overcome the current hurdles, barriers and problems on the way. I call this a new Leadership Strategy to improve the status quo exponentially by envisioning of what is possible in the Digtal Future rather than improvement by micro-management.

Most companies fail because they over-invest in what is rather than of what might be.

At tech conferences and leadership events we are listening to the most wanted tech and business keynote speakers. They tell us how they are changing the world, how they are disrupting industries, how they are growing highly profitable businesses. But how do you leverage this silicon valley mindset, change your habits and take action now? 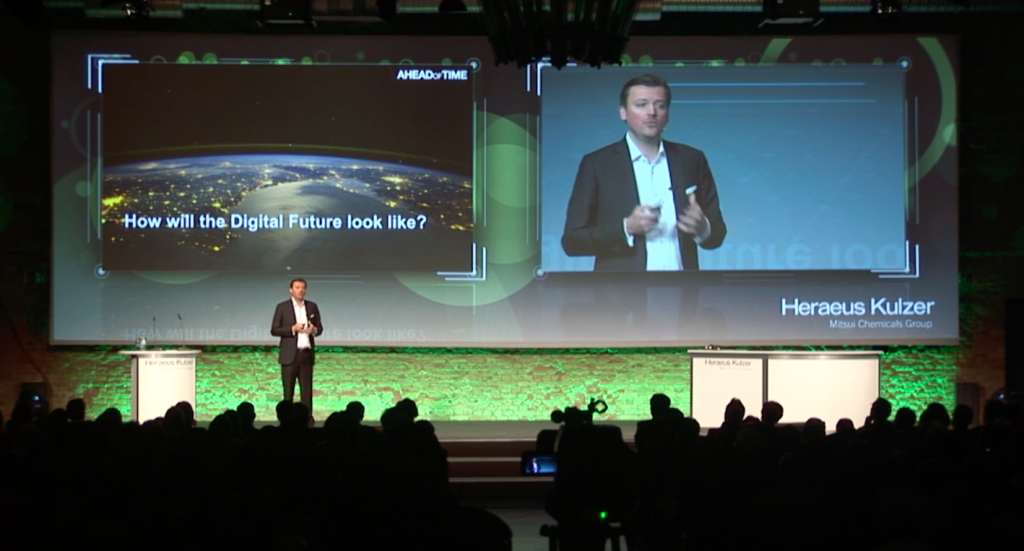 Exponentially growing technology, like VR, wireless sensors, cloud computing, cryptocurrencies, artificial intelligence or robotics will eventually disrupt every industry. Moonshot-Thinking is a terms created in Silicon Valley and adapted by several successful entrepreneurs and business leaders. The invention of the micro-processor was a moonshot. Google’s self-driving car was a moonshot.

What history tells us is that the key difference to the outstanding inventions in the past and the moonshot-thinking leadership strategies tech companies are embracing, is that they do it again and again and again. By introducing lean management, agile product development and startup thinking into their core of their culture. Google has started Google X as an initiative to continuously create moonshot-thinking projects. They created Google Glass to merge the real with the virtual world, Project Loon to bring internet connectivity to the world or Project Wing to rapidly deliver products by using flying vehicles such as autonomous drones or Project AI, an artificial neural network for instant speech recognition and computer vision.

How StartUps and Entrepreneurs Use Moonshot Thinking and Technology Innovation to Create Disruptive and Profitable Businesses?

StartUps not only have a large impact on the economy of a country but also changing the way companies are managed and how new products are developed and launched.
Tech Startups are creating something new under conditions of extreme uncertainty. Entrepreneurs and Managers at the largest corporations have very similar challenges – also it’s not very obvious at first sight. They have to envision the future to make the right decisions today. They want to find the right path in our fast paced digital society to build a sustainable business and make money.

With the digital economy comes a new form of digital efficiency fostering a new leadership culture to be capital efficient while leverage human creativity more effectively.

How to Create the Next Billion Dollar Company? 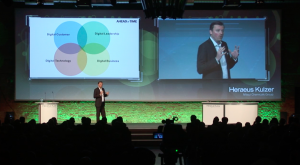 Today’s self-made billionaires have build technology companies like Facebook, Google, UBER, Dropbox, Salesforce, LinkedIn, WhatsApp, Alibaba. But what do these tech billionaires have in common. Are they smarter than we are? Did they had a better education? Did they work harder then we did? Most of them surpassed shortcomings such as average intelligence by taking large problems of our times, trying to solves problems with smart technology, they saw the big picture and what they could achieve in 10 or 20 years, they are taking calculated risks and overcome critical entrepreneurial barriers. Monty’s Keynote speeches dive into the mind of these self-made tech billionaires and explain the key steps to follow their paths.