How to reach 18 million people with a viral video?

I met Dr. Abraham Glezerman, Founder and CEO of Cardo Systems in Berlin at an ADC Event and talked with him about the huge success of his Viral Video Campaign.

“The Popcorn mystery” was started with one amateur video in english, followed by an Video response from Japan. After launching these two videos thousand of people tried to make popcorn with their cell-phones, too, and published videos on youtube. Even ABC and CNN aired several stories about the mystery.

After a few week Cardo published this Video “The Popcorn mystery resolved” and CNN invited Mr. Glezerman for an interview.

The results to far: 18 million people have watched the videos and much more heard about Cardo Systems for the first time.

Twine, a Web 3.0 platform, is now open to the public

“Twine is a smarter way to keep up with what you’re into.”

I am testing Twine since June 2008. The theme oriented “Twines” (Groups) are very useful to share ideas and save important information on one place. Yesterday they opened twine to the public.

I created three Twines with already over 60 members and I would be happy if you join and share your links and ideas:

Twine: Ahead of Time.

How open is our economy? Are you willing to share information online? Is Social Media really important for the internet users?

Here are some interesting facts recently published by ShareThis and Forrester.

The Top 20 of Social Networking Platforms 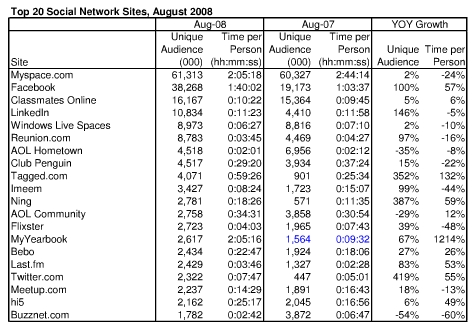 Here are the latest numbers of the Top 20 Online Social Networks.

Besides the well-known platforms like MySpace or Facebook there are some important trends and changes happening right now.
Elsewhere in the social networking space, Facebook continued to narrow the gap on MySpace, a trend we also noticed last month. Unique visitors to the site grew to 38.2 million, representing a more than 10% month-over-month increase and a 100% jump year-over-year. MySpace saw 61.3 million unique visitors – up slightly from last month, but still essentially flat compared to the same period last year. And business network LinkedIn grew 146% year-over-year to 10.8 million unique visitors.

Twitter is apparently growing rapidly. According to stats just released from Nielsen Online, Twitter recorded 2.3 million unique visitors in August (US-only), an increase of 422% from the same period last year. Moreover, visitors to Twitter spent 55% more time on the site on average – a total of more than 7 minutes per user. Those numbers point to rather robust growth for the site, especially considering many of its most rabid users access it through a third-party client like Twhirl or Tweetdeck.

Check out the Corporate Social Map of Panasonic Lumix created by Ahead of Time.
In 2008 the term „Social Map“ was highly discussed among bloggers worldwide. Here are some Examples of personal Social Graphs. Since then visualizations of personal Social Maps have been published, shared and discussed by individual Bloggers within the Blogosphere. These Social Maps created an intense discussion about digital reputation and digital identities. For companies a so-called Corporate Social Map is still very new and an unusual methodology, but also very effective and meaningful.

Your company, brand or product is already present in Social Media. You will find customer reviews, voting, rankings, comments or recommendations on different opinion-portals, blogs or social networks. Often people are sharing their positive or negative experiences with your product in public and even send their thoughts to their peer groups, friends or colleagues. A Social Map shows where these conversations take place, how intense the discussion actually is and how you can actively participate. 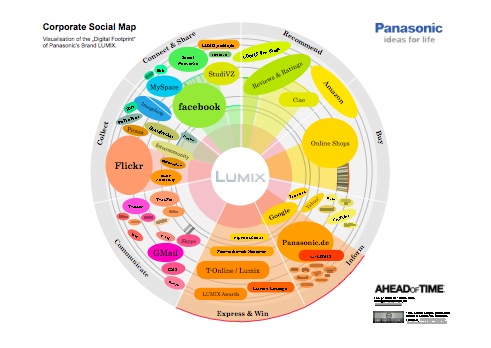 Download the full Whitepaper and the Social Map Illustration here:

My public profile on Dopplr

Dopplr has released a new function. You can now publish a public profile. Here is mine.

They also show the your “average speed of travel” called velocity:

The Twitter competitors Jaiku and Pownce are much smaller. 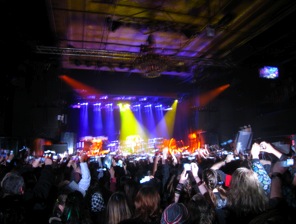 Tokio Hotel did is first concert in New York City this evening.
Bill, Tom, Gustav and Georg presented their songs in front of over 1000 people. The line in front of the event location was going over three blocks. The main phenoma about the group is that the CD was not even published in the US, yet.

Note for all Marketeers: Everybody who does not understand until today that the teens and twens live in a global digital world, should visit a Tokio Hotel concert. There are even more digital cameras then people in the location. They film everything they can and put online as soon as they get a conncetion. They share the songs via social networking site worldwide or watch the clips on youtube.

Here is a live video of the song “Durch den Monsun” recorded today on Feb. 18th in NY:

Video from the Backdoor:

Video just before the start of the event in front of the concert-location:

Today I did an interesting Video-Interview with our TrendScout John Rajeski in Seoul, South Korea. We recorded it during the VDZ Asia Tour in February 2008.

He is taking about the major trends in mobile media in South Korea and gives a short overview.

Today I want to give you two great christmas present ideas.

The first is called ninemillion, managed by my friend Claudia Gonzalez-Gisiger from the UN Refugee Agency – UNHCR.

The goal of ninemillion is to provide an Education for nine million refugee children by 2010.

The second christmas gift idea is called Kiva.
Kiva is an organization that allows people to lend money via the Internet to small businesses in developing countries. It is a non-profit organization founded in 2005 and headquartered in San Francisco. Kiva is supported by donations from its users and through partnerships with businesses and other institutions.
I really like the idea of Kiva – because you can choose where your money is going and what is done with it. You get a total transparency of the project. 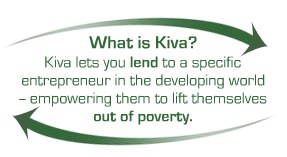 Viral Marketing at its Best

Note: Took the video out for now. You can check it out here: http://www.dylanmessaging.com

Create your own movie, send it to friends, embed it into your blog, myspace profile or even your facebook account… try it. I really like it. 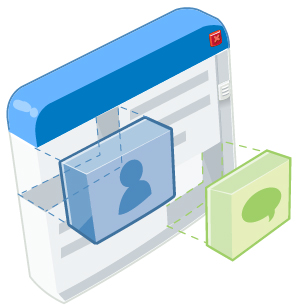 Google launched its counterproject to facebook – it is called Open Social.

I found a great Review on Marc Andreessen Blog. Here are some quotes:

Open Social is an open web API that can be supported by two kinds of developers:

Open Social takes the Facebook platform concept and provides an open standard approach that can be used by the entire web. Open Social is an open way for everyone to do what Facebook has done…

Check out www.gizmoz.com – Eyal, the founder did a great job and started the new version of the Gizmoz Service a few weeks ago. It is great…

Express Yourself with Gizmoz Video Clips
20
May 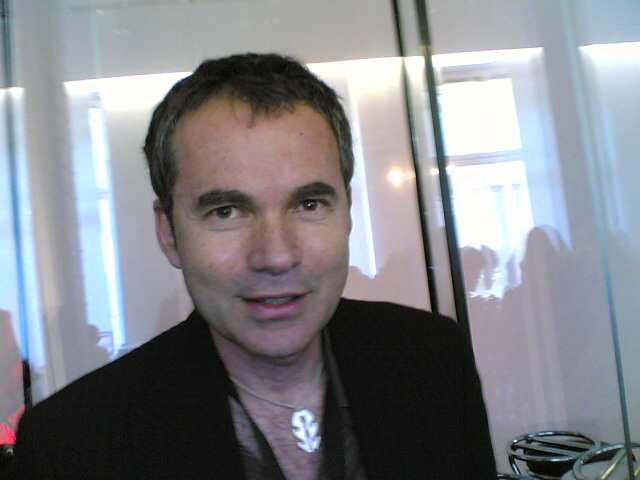 Today I read at Marcel’s Blog that FON received 18 Million Euro in Venture Capital in their first investment round.

Gratulations to Martin Varsavsky who founded the new wifi-venture FON. He was also speaking at the Digital Lifestyle Day 2006 in Munich. We really think this will be a hot business modell for the next years.

Here is the official News from FT.com:

Google, internet voice-call company Skype and leading venture capitalists have invested in a new user-run network of wi-fi hotspots, which they hope will become the biggest in the world by the end of the year.

Google, Skype, Index Ventures and Sequoia Capital will announce on Monday $21.7m (â‚¬18m) in first-round funding for Madrid-based Fon to build on its growing global band of “foneros”.

Foneros are users of the service and known as either “Bill”, “Linus” or “Alien”. Bill members â€“ after Bill Gates â€“ download secure software from Fon that turns their home wi-fi network into a hotspot anyone within its range can use to connect to the internet for a fee.

Linus members â€“ after Linus Torvalds, creator of the free Linux software â€“ allow their hotspots and bandwidth to be shared for free and can use any other members’ without charge.

Aliens pay to connect to the Fon network and do not share their own networks. Fon and Bills will share the revenues earned from Aliens and other Bills.

The service went live in November and has registered 3,000 users in 53 countries in two months. Fon says it is growing faster than T-Mobile, the biggest network, with 24,000 hotspots established over four years, and expects to exceed this as word spreads.

“We think this is very disruptive technology and it’s going to be global, very much like Skype,” said Danny Rimer of Index Ventures. “It’s another example of an incredibly innovative company coming out of Europe.”

Internet service providers may object to their subscribers reselling the bandwidth being provided to them but Fon says some have already signed up as partners and can earn a share of Alien revenues from the venture.

The company was founded by Martin Varsavsky, who previously formed Ya.com and Jazztel, respectively the second-largest internet and publicly traded telecoms companies in Spain.

What is Social Media?