Al Gore wants to shift to clean-energy within 10 years

Today Al Gore was presenting his goals on “clean energy” in Washington D.C.
He is challenging USA to shift the production of every kilowatt of electricity to alternative energy like wind or sun within the next 10 years. 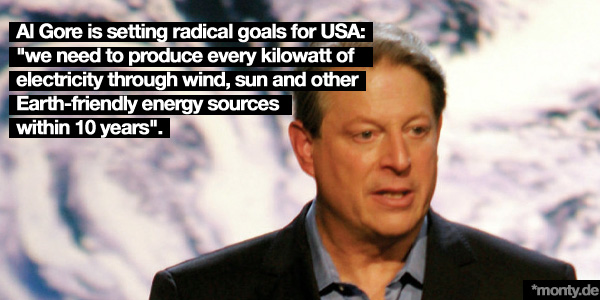 Rising fuel costs, climate change and the national security threats posed by U.S. dependence on foreign oil are conspiring to create “a new political environment” that Gore said will sustain bold and expensive steps to wean the nation off fossil fuels.

“I have never seen an opportunity for the country like the one that’s emerging now,” Gore told The Associated Press in an interview previewing a speech on global warming he was to deliver Thursday in Washington.

Gore said he fully understands the magnitude of the challenge.
The Alliance for Climate Protection, a bipartisan group that he chairs, estimates the cost of transforming the nation to so-called clean electricity sources at $1.5 trillion to $3 trillion over 30 years in public and private money. But he says it would cost about as much to build ozone-killing coal plants to satisfy current demand.

“This is an investment that will pay itself back many times over,” Gore said. “It’s an expensive investment but not compared to the rising cost of continuing to invest in fossil fuels.”