I started to produce videos for my YouTube Channel in December 2006 and now I realized that I have reached over one million views, exactly 1,039,903 views today. Amazing! 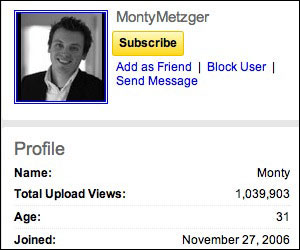 Since the start I kept producing videos whenever and wherever I had time – at conferences, during business travel or at exciting events. So far I have published 136 Videos and most of them are business related or feature executive interviews. Although the videos are not as funny as Fred’s or exciting as Lady Gaga’s, people do like and watch them.

It is interesting aswell to look at the most viewed videos – so here is my top ten:

Last but not least I want to thank all my viewers and readers for their support and feedback!!!

Illustration: How much do musicians / solo artists earn online?

Would you start a printed Newspaper today? “The National” did two years ago in UAE.

Hassan Fattah is Chief Editor of “The National” in Abu Dhabi. I met Hassan Fattah at the Abu Dhabi Media Summit 2010 and I asked him how to build up a Newspaper from scratch during these turbulent times. The newspaper was started in 2008. Hassan Fattah said: “Print still counts in this part of the world and that’s why we have started a printed Newspaper first and now expand in digital media formats.” Print is also the biggest driver for the Newspaper – “Print is King” as Mr. Fattah said in this video interview:

About “The National” www.thenational.ae:
The National is a government-owned English-language daily newspaper published in Abu Dhabi. The editor-in-chief since June 8, 2009 has been Hassan Fattah. Mubadala Development Company, an investment company owned by the Abu Dhabi government and royal family, owns the paper. The National has built its staff of 250 from newspapers around the world, including the Wall Street Journal, the New York Times and the Daily Telegraph of Britain. Martin Newland was editor of the Daily Telegraph from 2003-2005 and he took with him many former Telegraph employees, most notably Colin Randall (former Telegraph executive news editor), Sue Ryan (former managing editor) and senior photographer Stephen Lock (who covered domestic and foreign news and the international fashion circuit during 20 years on the Daily Telegraph). The National is one of a few English-language newspapers produced in the United Arab Emirates, and is the only one produced in Abu Dhabi.

48% of Books sold on Amazon are electronic Books (eBooks)

Amazon.com Inc is introducing Kindle, its wireless electronic reader, for over 100 countries globally. Chief Executive Jeff Bezos said that for every 100 customers who buy a book, some 48 buy it as an e-book — up from 35 five months ago.

Although Amazon does not release sales or profit figures for the Kindle, analysts believe it commands No. 1 market share in a growing market fueled by more online activity and a lingering slump in publishing and retail bookselling. The devices have proven popular with readers and travelers who like the convenience of downloads and avoiding heavy books, but high prices have kept many potential users at bay.

Amazon has an agreement with AT&T wireless for the international version, under which the carrier handles global network relationships, Bezos said. The new device is designed to work with the globally popular 3G GSM standard. The wireless coverage includes a wide array of countries, including China and Indonesia, for example, so the device will work in those countries although units won’t be shipped there.

Although Amazon does not release sales or profit figures for the Kindle, analysts believe it commands No. 1 market share in a growing market fueled by more online activity and a lingering slump in publishing and retail bookselling. The devices have proven popular with readers and travelers who like the convenience of downloads and avoiding heavy books, but high prices have kept many potential users at bay.

Amazon.com Inc is introducing Kindle, its wireless electronic reader, for over 100 countries, including China and most of Europe, intensifying a battle for the burgeoning digital book market.

The move, announced on Tuesday, gives the world’s largest online retailer the widest global reach among its competitors, including chief rival Sony Corp. The Kindle will sell for $279 in other countries. Amazon also said it would cut prices for its U.S.-only Kindle by 13 percent to $259 from $299, bringing its cost closer to its rivals. The new price is $100 lower than it was a year ago.

Amazon — which regards the Kindle as a pivotal growth driver — said over 200,000 English-language books from a host of publishers as well as more than 85 international and U.S. newspapers and magazines would be available on the international device, which begins shipping October 19.

“Our vision for Kindle is every book ever printed, in print or out of print, in every language, all available within 60 seconds,” Chief Executive Jeff Bezos told Reuters. “That’s a multi-decade vision,” said Bezos, visiting a Kindle office in the Silicon Valley city of Cupertino.

Analysts have pondered the likelihood of Amazon developing the Kindle into a tablet-like device for tasks like emailing, texting and surfing the Web, thus competing with devices reportedly being developed by Apple Inc.

But Bezos reiterated his intention to optimize the reading experience, saying the company rejects compromise, whether it be a touchscreen that affects legibility or computer displays that eat up too much power. At the same time, Amazon is working on making Kindle digital books available on more devices. Besides the Kindle, those books can now be accessed on the iPhone or iPod Touch.

“We want you to read your Kindle books on laptops and smartphones, anything with an installed base,” Bezos said. He said he was not “in principle” against making the works available on rival devices like Sony’s, but was focused on platforms with “large installed bases.”

E-readers are expected by some to be the hottest gadget this holiday season and Bezos said he had “a lot of confidence” that it would be a “great holiday quarter for Kindle.” Forrester Research estimated 3 million e-reader devices would be sold in the United States in 2009, up from an earlier estimate of 2 million. That could double in 2010, bringing cumulative sales to 10 million by end-2010. The research group predicts that Amazon will take 60 percent market share in 2009, followed by Sony at 35 percent.

In July, Credit Suisse estimated revenue and gross profit from the Kindle could reach $420 million and $35 million, respectively, in 2009, representing some 8.4 percent of Amazon’s total revenue.

Next big thing: Market for electronic paper to hit $9.6 billion by 2018

Sales of electronic “paper” displays such those used in the Kindle and Sony Reader will approach $10 billion by 2018, up from an estimated $431 million this year, according to a report released today from DisplaySearch, a technology research firm.

“E-paper displays are taking off with consumers due to their low power consumption and ease of reading, especially in sunlight,” Jennifer Colegrove, DisplaySearch director of display technologies, said in a statement.

Colegrove said the popularity of “green” products is expected to give digital paper a sales boost. Consumers who cringe at throwing away newspapers and magazines can read articles guilt free on devices with e-paper, which sip less power than back-lighted LCD displays.

As a result, annual sales of digital book readers are projected to zoom from 1 million units in 2008 to 77 million in 2018.

Because of their thin profile, electronic paper has been embedded in items other than readers too, including magazines, credit cards, store-shelf tags and even clothing.

As promised I had been at CondéNet today for an interesting interview with Marc Hoenke, Country Manager Germany. Vogue and Vanity Fair launched a new format for parts of their online website.

Interview: Marc Hoenke, Country Manager Germany, give insights, backgrounds and an outlook of their new project

See it in action: Marc Hoenke gives us a tour through the new online magazine.

Media-Innovation? High gloss Online Magazine?
Today, Condé Nast starts an innovative new project in Germany. The websites of Vogue and VanityFair get a new glossy online magazine. Brands like HERMES and HUGO BOSS love this new format and placed ads in the first issue. Marketing executive can finally place their full-page ads like in a normal fashion or lifestyle magazine, but in combination with the interactivity of the web.

But how useful and intuitive is such a “Media – Miki” in reality?
I will ask this question today at an exclusive interview with the creators of the MIKI, IntelliMedia and Condé Nast.
The full interview and more reviews will follow later. But I will be giving live updates “on the go” at my Twitter Channel: http://twitter.com/montymetzger