M-Days is the biggest Mobile Media Conference in germany and one of the most relevant in Europe. I will be hold a keynote and present a few insights from the open think tank focusing on the future of Mobile Media Mocom2020.com as well as from my book “Mobile Future @mocom2020“.

The topic of my session at M-Days is called: “Mobile Trends 2020, Mobile Commerce and App-Video-TV. What comes next in Europe?”

From the M-Day programme:
Mobile Trends 2020, Mobile Commerce and App-Video-TV. What comes next in Europe?

The Google/Admob acquisition sends out a clear signal to the market: mobile is different and mobile is hot. The advance of touchscreen devices, app stores and new advertising approaches/formats are all coming together in a new kind of interactive mobile internet, a brave new place where new content, new experiences and even new mobile search services will set the bar. Mobile Trends 2020, Mobile Commerce, Mobile Video and TV.

I presented the book “Mobile Future @mocom2020” at the Mobile Media World 2009 in Toronto. Here is a video interview filmed by Bnet.tv

Get some insights and background information about the open think tank about mobile media and communication.

How Nokia will impact the Computer Business

The consumer electronic market is changing rapidly, key-players are changing their positions and trying to catch the consumer in their digital life. Mobile Phone Manufacturer and Computer Companies are getting closer and closer. The new niche of Netbooks already became a big boom, documented by my friend Sascha on NetbookNews.de (Netbooknews.com).

Since a few years computer manufacture offer notebooks and laptops with integrated 3G Sim cards sometimes in combination with data-plans by a mobile network provider. Netbooks are low-cost laptops optimised for surfing the Internet and performing other basic functions. Pioneered by Asustek with the hit Eee PC in 2007, netbooks have since been rolled out by other brands such as HP and Dell.

But also the smartphones become more and more powerful and merge into small “mini computers”. So the gap between a PC and a mobile phone is almost disappearing and the fight for this market between the industry leaders has started. 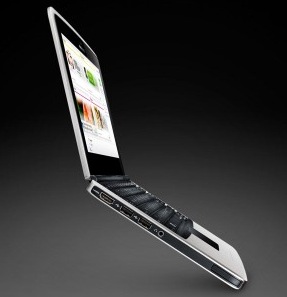 Nokia’s Executive Vice President for Devices, Kai Oistamo, summed it up simply as follows:
“A growing number of people want the computing power of a PC with the full benefits of mobility. We are in the business of connecting people and the Nokia Booklet 3G is a natural evolution for us. Nokia has a long and rich heritage in mobility and with the outstanding battery life, premium design and all day, always on connectivity, we will create something quite compelling. In doing so we will make the personal computer more social, more helpful and more personal.”

Nokia’s first netbook will use Microsoft’s Windows software and Intel’s Atom processor to offer up to 12 hours of battery life while weighing 1.25 kilograms. Research firm IDC expects netbook shipments this year to grow more than 127 percent from 2008 to over 26 million units, outperforming the overall PC market that is expected to remain flat and a phone market which is shrinking some 10 percent.

“Nokia will be hoping that its brand and knowledge of cellular channels will play to its strengths as it addresses this crowded, cut-throat segment,” said Ben Wood, director of research at CCS Insight. “At present we see Nokia’s foray into the netbook market as a niche exercise in the context of its broader business.” Nokia’s choice of Windows software surprised some analysts who had expected the company to use Linux in its first laptop.

The Status of the Mobile Web with Michael J. O’Farrel

I met Michael J. O’Farrel for an interview about the Status of the Mobile Internet in Toronto, Canada.

Michael is Chief Marketing Officer at Zameen Group and Vice Chairman of ooober; as well as a strategic advisor to mobigenics, Graham Sanborn Media and The Centre for Creative Communications at Centennial College. He is Chair of the dotMobi Advisory Group and co-author of the Wiley publication Mobile Internet for Dummies.
Michael is also Advirsor to the @mocom2020 Projekt:
http://www.mocom2020.com/authors-contributors/

Today Christian Magel and Monty Metzger have presented the Video of key results of the MOCOM 2020 project at Next’09.

Launch of the new Opera Mobile Browser 9.7 at CTIA Wireless 2009

For carriers specifically, Opera Mobile 9.7 with Opera Turbo provides a more consistent and compelling full Internet experience by compressing data up to 80%, thus reducing unwanted traffic and congestion and allowing users to access the Web regardless of network limitations.

“Today, carriers and mobile device manufacturers alike are looking for solutions that take advantage of existing technologies and investments while trying to maintain a high level of service for their customers,” explains Rod Hamlin, Senior Vice President for the Americas for Opera Software. “Opera Mobile 9.7 with Opera Turbo gives our business customers to ability to bring a rich Internet browsing experience to their mobile device and to the end-user without having to allocate new resources and development costs.”

Here are some of my pictures from the Mobile World Congress (MWC09).

Video Interview filmed at the NTT Docomo booth at the Mobile World Congress (MWC) 2009 in Barcelona. In Japan there are already over 53 Million mobile phones with NFC functionality in the market. NFC enables mobile payment, local promotions (coupons) or easy mobile to mobile money transactions.

Near Field Communication or NFC, is a short-range high frequency wireless communication technology which enables the exchange of data between devices over about a 10 centimetre distance. The technology is a simple extension of the ISO 14443 proximity-card standard (contactless card, RFID) that combines the interface of a smartcard and a reader into a single device. An NFC device can communicate with both existing ISO 14443 smartcards and readers, as well as with other NFC devices, and is thereby compatible with existing contactless infrastructure already in use for public transportation and payment. NFC is primarily aimed at usage in mobile phones. (Via Wikipedia)

The Mobile World Congress in Barcelona 2009 is gathering interesting people and active Twitter-Users from around the world. We want to invite twitter-fans, executives, experts, bloggers and journalists to the first
MOBILE MEDIA TWEETUP.

The event is realized by MOCOM 2020 – in teamwork of SIMYO and SMAATO.

The Mobile Media Tweetup is a place for fresh ideas, new inspiration and interesting people. But it is also an experimental gathering which idea was created just three weeks before the MWC’09 starts. Participants will enjoy short dinner speeches and networking in an international atmosphere. Ready for a sincere warm up for a long party night or as a cool down from MWC day’s hectic.

Chill with drinks and food and join us on Tuesday, March 17th, in Barcelona.
The event starts at 7 PM local time.

For the MOCOM 2020 Community we have reserved 20 tickets.
(First come, first serve.)
To find out more visit: www.mocom2020.com

Unleashing the power of an Open Mobile Internet

Philip Olla just wrote an interesting article for the MOCOM 2020 Project about the power of the Open Mobile Internet (OMI).

There are phenomenal implications of combining “open” software, “open” hardware on an “open” network? The current traditional closed mobile Internet could transform into a vibrant ecosystem in which the network operator, content provider and application developers, operate together with revenue sharing business models. There is no technical reason why a large media or entertainment organization cannot enter this market as the barrier to entry has been flattened with the open source platform called Android, which is similar to the I-Phone platform. The Android platform is a platform that will see an abundance of programs which will evolve into a profitable marketplace for developers. The other factor is the open network availability question, and there are strong positive moves from network operators and the US regulators with this regard. The future looks bright and it seems that an Open Mobile Internet is about to be unleashed.

Yesterday I presented the MOCOM2020 project to the public at the Mobile Monday National Summit in Munich.

MOCOM2020 is an open think tank about the future of mobile media worldwide.

I am excited to be part of this open innovation project with these motivating partners and experts. Today, we already have six astonishing people in our advisory board and we are planning to expand this board to up to 12 people within the next weeks. We will start to ask key-questions to challenge the status quo and to open up the conversation. Within the project process we will focus on major topics and develop scenarios and create a roadmap of the upcoming years. So we set some general goals, structure and outcomes of the project, but the results are not defined nor described, yet. That’s why it will be interesting to watch how the project evolves.

You can look at www.MOCOM2020.com to learn more about the project.

I am also very amazed that the MOCOM2020 Teaser Video, which we have published yesterday, already hit over 12.000 views on Youtube.

Minfo is the leading mobile / wireless search platform in China. Alvin Wang Graylin is the CEO and Co-Founder of Minfo. They started four years ago and have already reached over 13 million users. They have just signed a cooperation with China Telecom to be the exclusive mobile search and mobile advertising provider. This will give Minfo access to over 350 million China Telecom subscribers, over 100 million with mobile internet access.

Alvin told me about the differences to Internet-based search and how the satisfy the mobile users. Mobile Search is not entering one keyword and get a list of links back, it is more about answering one question. Minfo is offering SMS-based and Mobile Internet based services. Searches via mobile web are taking around 50% of all searches (and 50% via SMS), but is increasing rapidly. They developed a semantic search method and support several languages.

Here is the Video Interview filmed at the Monaco Media Forum 2008:

Omar Hamoui about the Status Quo of Mobile Advertsing