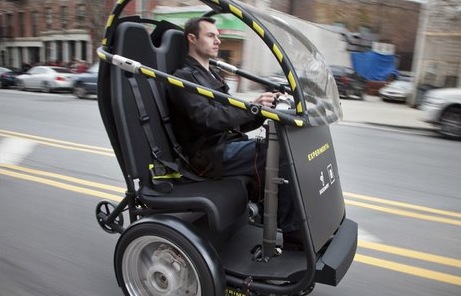 GM and Segway developed a two-seater electric car to debut in NYC in 2012.

US carmaker General Motors is joining with scooter maker Segway to make a new type of two-seat electric vehicle. The prototype, which will be debuted in New York, is aimed at urban driving. GM aims to start making them by 2012. The vehicle, named Puma, has a top speed of 35mph and can go as far as 35 miles on a single charge. It will use lithium-ion batteries. GM, having been bailed out by the US government, is looking to smaller vehicles to secure its future.

GM has already received at least $13bn in aid from the US government and seems likely to enter bankruptcy. It is looking to more environmentally-friendly models as consumers have abandoned their expensive trucks and cars. “We are excited to be working together to demonstrate a dramatically different approach to urban mobility,” said Jim Norrod, chief of Segway. Segway introduced its personal transporter in 2002 and has sold more than 2,000 in the UK. They are capable of speeds up to 12mph and cost £4,795.
The personal scooters came to international prominence when US President George W Bush fell off one while on holiday in 2003.